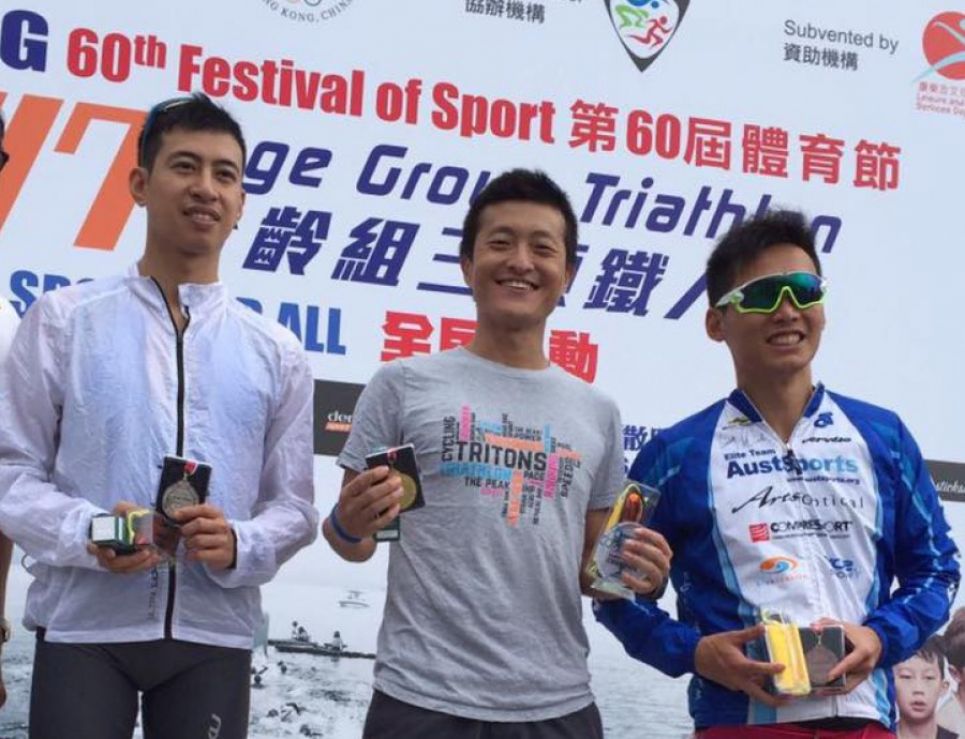 FOS Plover Cove triathlon has always been one of the must do local races for me as 1) overall its a pretty fun course to do and 2) somehow I’m faster than I usually am when racing there. However, this year is a bit different for me as the race is only a week after Challenge 70.3 in Taiwan. So naturally, the lazy Jeff comes out with loads of BS excuses, “Pollution seems pretty bad”, “not used to the new road bike”, “looks kinda wet”, “I’m lazy" etc etc. But somehow, I made it to the race.

As with previous years, Tritons were quite well represented with a mid-sized contingent at the race. Nick Mawdsley returning to the scene after a 3.08 marathon performance, Stuart Wong looking strong post Challenge Taiwan, Rob “Trigon” Kushner who has been racing non-stop, Mark Lee who has been very fast in the pool lately, Jerry N and Richard Brooks also making a come back…… and of course Sophia who typically shows up completely unprepared but guaranteed to walk away with a win and some new Tritons as well.

As usual, after transition set up, I strolled to the swim start to watch earlier (older) age groups get in the water and within 5 mins, I can sense something is not quite right. People huddling and whispering, I huddled with them and apparently the swim seemed pretty hard with strong currents and choppy water! My first thought was: “NICE! The harder the swim the better it is.” and that I have Coach Fen and AM to thank of course.

Swim start - As the gun goes off, I sprinted away and tried to get some clear water, as expected there were strong currents and overall pretty choppy.  It was a 2 lap swim (barely a warm up for swim lab long sessions!) and as I finished the 1st lap, most of the guys drafted me had dropped off and I was battling with a guy until the finish (no clue who that is). Not sure where I placed after the swim, I rushed through T1 as if I was Ray Picard (not!), to my surprise it seems most of the bikes were still there, which gave me some encouragement.

Next up - a 4 lap bike course with a tough-ish uphill climb (a bit like the lower peak?!) on the way to the turn around and then mostly downhill coming back (need to be a bit careful here as a crash would be quite nasty!). As I arrived on the bike course, Jerry and Mark Lee are already on their 3rd lap (More mature age groups started quite early so they started AGES before I did!). As Jerry came by, he shouted: “Jefferson wei!”, and so I shouted back: “Let’s work together!”, as Mark Lee caught up, we formed our own little draft pack, only to be separated on the steep part of the uphill…..when I dropped them :p.

(Jerry and Mark would have their own stories, but I won’t listen to them as the only official story is one on the Tritons website)

After the turn around, they quickly caught me on the downhill coming back and as I was late to the party, after one lap of working together, I have to see them off going into T2.  I ended up riding alone for the rest of the bike course battling with whomever I see in front of me.

As I rushed through T2, legs were still feeling good but I noticed one very interesting situation - there were no bikes around my rack position! Trying not to get overexcited, I transitioned smoothly (albeit slowly) into the run. The run course was flat, flat and flat, 2 laps of 5 km along the reservoir. Despite some small lingering injury on my left ankle, I was running surprisingly well and fast (in my terms) with only a handful of guys passing me, but since they were kids I can be sure they don’t belong to my AG. As I was about to finish my 1st lap, I found a familiar face and possible AG competitor around 500m ahead of me. At that split second, I decided to chase him down and risk blowing up (as I usually do), I finally caught this dude 1k from the finish as he was cramping, so I absorbed his energy as I pass (as Coach Mike would advice) and sprinted to the finish! I ended up also breaking my PB for 10K :D

My finishes were never great to say the least. The type of finish where the athlete jogs to the finish with a big smile, high five-ing spectators with hands raised up in the air, never ever happens to me. I would either finish on a wheel chair, cramping really hard and limped to finish or just get dragged to the medical tent. As there were no wheel chairs nor medical tents at Plover Cove, I finished on the roadside curb…. I think I just laid there for a long long time as I tried my best to not throw up next to a bunch of spectators.

Ultimately, I guess the effort paid off and I came 1st in my AG! For the very first time at the top of a podium which needless to say felt very good!

Sophia as usual won her AG as well as for her gender, Mark Lee was the 1st Triton across the line (the run was so fast!) with a bronze in a very competitive AG, Rob Kushner came 3rd, also a first time podium. All in all a good showing of strength by the Tritons! 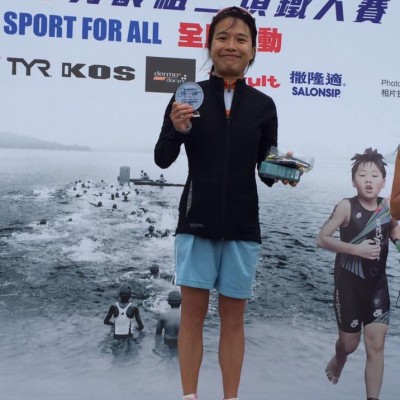 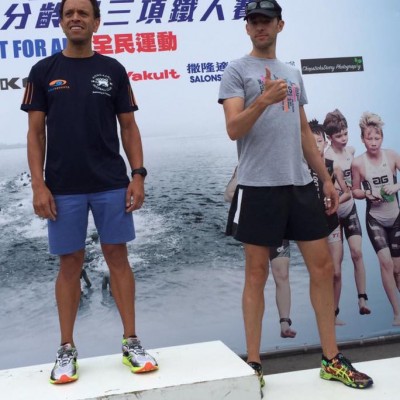 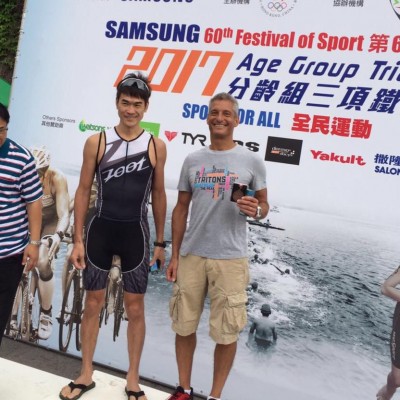 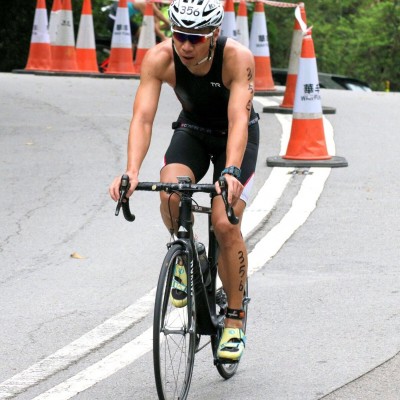 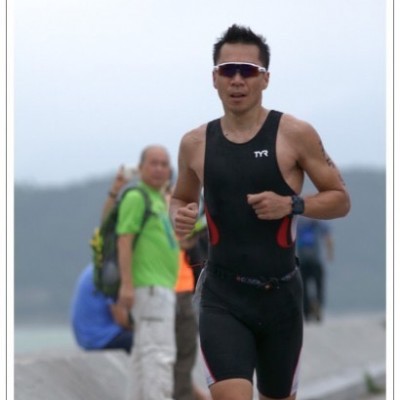 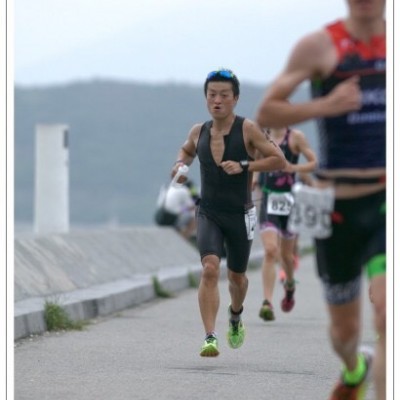 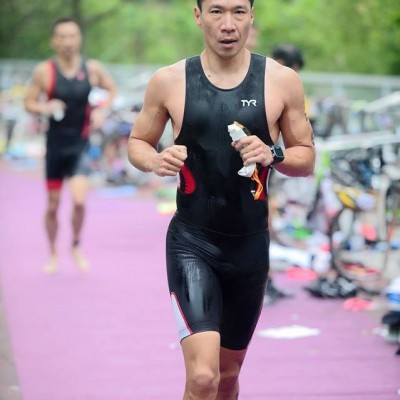