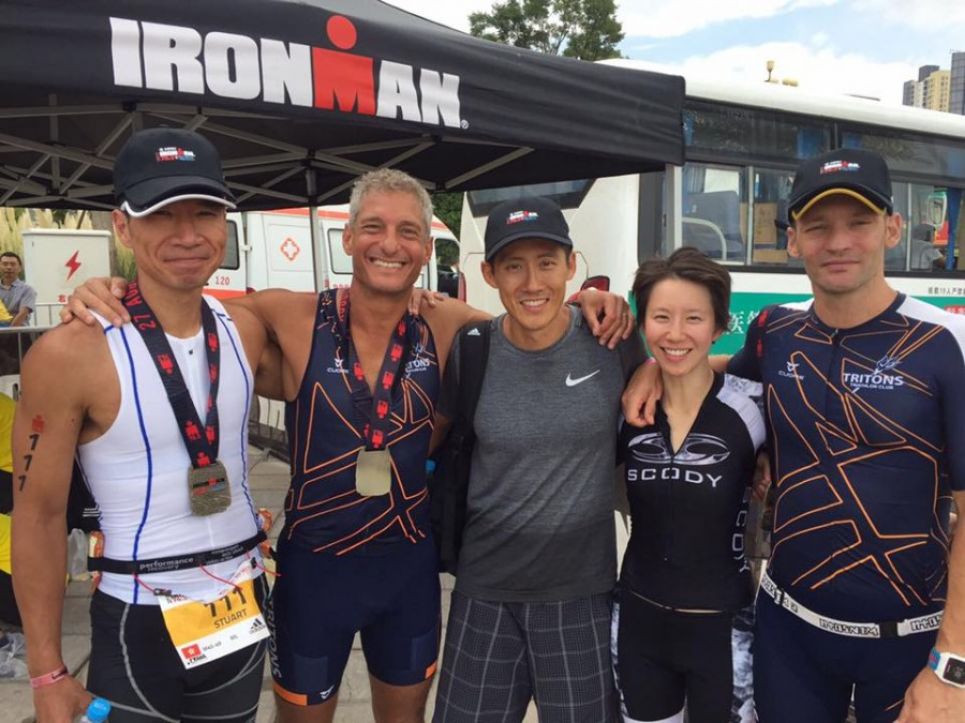 The swim was in a beautiful reservoir surrounded by green hills, and the water was clean and tasted pure.  It was the most beautiful of the four China races, though Liuzhou was a close second because of the scenery and the favorable current.

The course was clockwise and shaped like an upside down “L”, so you couldn’t see a large part of the course from the start line.  The sun was rising over the first half of the courses, so it made sighting a challenge, favoring swimmers with open water experience.

The bike course was a well maintained highway with three lanes blocks off by spaced plastic barriers cordoned off with plastic tape.  While we biked on a three-lane highway totally safe and clear of all traffic, more care was taken in all the previous four China races.  In those races, the highways were swept clean and there wasn’t a stone or any debris in sight.  Additionally, in the previous four races, the highways and intersections were cordoned off with metal barriers and the intersections blocked by massive industrial trucks.  As noted, however, there was neither traffic nor concern that a car would run onto the race, as there is in many races (i.e. Danang).  I saw a lot of small and medium sized rocks, as well as bolts and other metal bits along the road and was concerned about a flat.  That being said, the roads were better maintained than those in HK at Tung Chung.  I am being picky in this regard only in comparison the four previous races I’ve seen a noted degradation in pre-race preparation of the roads from race to race, with Quijng being the worst (while still much better and much safer than HK roads).

The bike was fast and generally enjoyable, but only because of the long downhill portions on a wide highway wherein we reached speeds exceeding 70kph.  There were two long loops wherein one direction was rolling hills with a general climb and a long climb toward the turnaround of 5km at 3.4%   and the return was generally downhill.  After the turnaround, however, we had a 5km downhill at 3.4% that smooth and straight, so a full aero-tuck allowed these fast speeds to be reached.

The race images and advertisements led us to believe that the race would be amongst the rice paddies and sharp peaks common in Yunnan.  It was nothing like that.  It looked much more like riding through Shenzhen with our view being that of factories, industrial developments and boring straight highways.

The run was as an up-and-back along a major avenue, and it was terribly boring, as well.  The only interesting portion was a partial loop through a massive sports stadium where a few hundred kids were seated and cheering.  That was fun.  There were adequate aid stations each 1.6km offering Coke, water, electrolyte drinks and food.  Altitude made the run a challenge, of course, but it was not the only reason for my poor showing.  The markers were clear, and there were sporadic batches of students along the way cheering us on.

This is where Qujing failed most, as compared to the amazing race-prep and support for the previous four races.  The logistics of pre-race day were terrible.  T1 and T2 were in two different locations and the “race hotel” was in a third.  We spent hours in buses running around town to register, try to get a practice swim in, check-in our bikes and arrange our run bags, and then get back in time to have a bite to eat, turn around and go back for a race briefing.  While it is not uncommon to have T1 and T2 in different spots, having the race hotel in a third location – with all three far apart – made the day before the race more stressful and tiring than all previous China races.