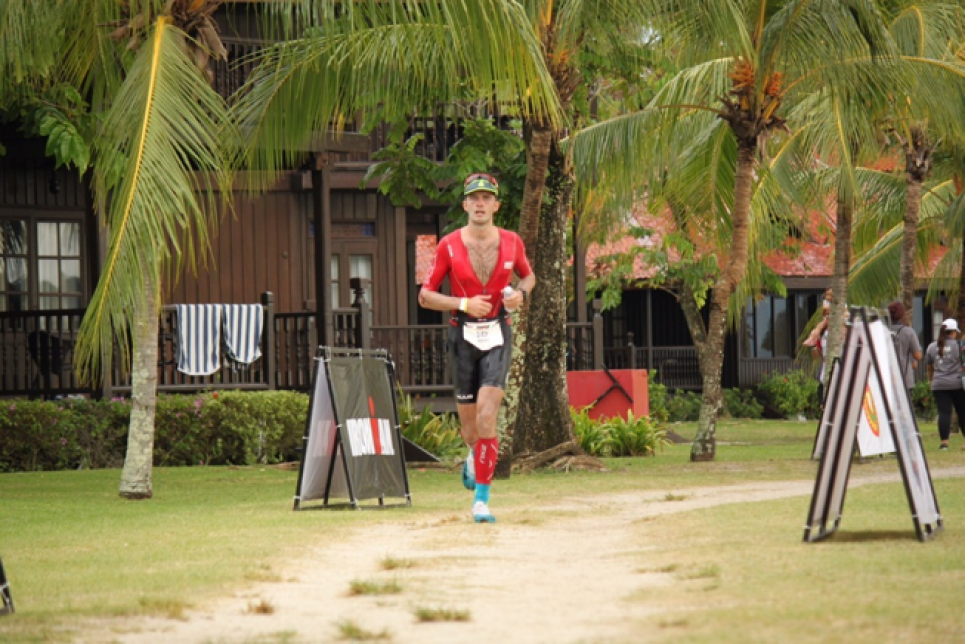 Signing up for an ironman is as easy as it is thrilling. Way back June, I can distinctly recall the buzz of signing up with a group of friends for what would undoubtedly be a big challenge, but the well-researched and meticulously colour-coded spreadsheet on my work desktop was telling me I had twenty weeks, practically an eternity. After a quick trip with the Tritons to Thanyapura to kick-start the new highly focused lifestyle, training really began.

Fast-forward through the hazy days of work, holidays, junks, and occasional TT monotony at the airport, and suddenly the temperature had dropped and the taper had arrived. Without a long run under my belt I knew it was going to be a grueling day, but was none-the-less I was excited to start racing.

We had all decided to stay at the Meritus Palangi Beach Resort (which I would highly recommend), which as you might hope or expect, is right on the beach, and conveniently right on the finish line. If it hadn’t been for the dangerously high proportion of calf compression socks, and chest-pumping worldwide finisher tops, one could almost have mistaken our surroundings for a typical weekend retreat in the sun. I somehow managed to restrain myself and not purchase an aero helmet to wear to breakfast, just to fit in with the crowd.

Friday consisted of bike set-up, and check-in at T1 and T2 which were quite separate. With multiple bags plus special bags, it was a rather confusing day of working out how to adequately distribute lube, Imodium, and whatever other essentials I envisaged I might require the following day. Eventually we were back at the resort, from where wandered over to the restaurant on the beach and took a few pictures as the sun descended. 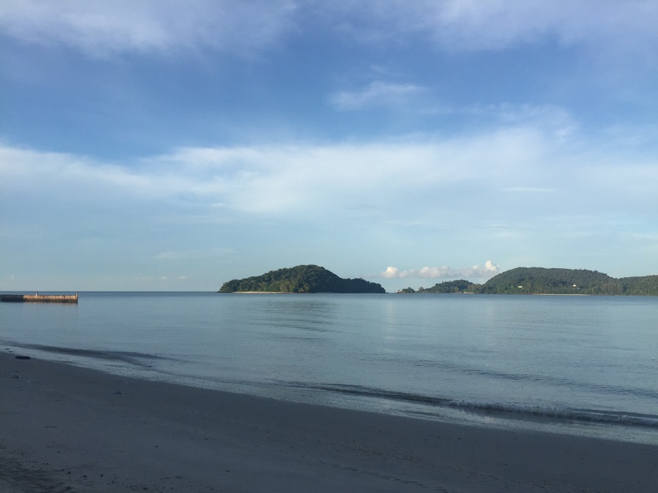 The big day arrived and surprisingly the nerves were ok. When the presenter riled everyone up, and then asked who was competing in their first ironman, our hands shot up and we shouted loudly. He was surprised we were standing towards the front of the rolling start, but having progressed from Lane 1 to Lane 1.5 on Tuesday nights, I was feeling reasonably confident, and we all wanted to see the pros go off. The swim is two very well marked clockwise laps, separated by around 50 metres of terra firma in order that the more land-oriented mammals amongst us don’t overly panic. I set off at a steady pace on the left, away from the crowd as much as possible, and concentrated on breathing. I’m not entirely sure how I was able to not find any feet on the first lap, but perhaps on the second lap I either remembered to sight and swim in a straight line, or the swimmers around me were more suited to my pace, I was able to find some feet. 1:16.03, my furthest swim to date, I was relieved to get out of the water onto the bike.

Langkawi offers a spectacular bike course, encompassing two laps of the island, complete with 1,500m of climbing. I soon got into a routine of slowing for aid stations, refilling my torpedo bottle with lucozade, and drinking enough before the next station. Although the majority of the inclines were gentle slow burners, there were a couple for which I had to get out of the saddle and slowly push my way up. Incredible to think that to match the fastest bike time, one would have to average 40.1 kmph on this course, an incomprehensible feat. The temperature climbed, and despite the good fortune of a slightly overcast day, it was hot. At around 140 or 150km the skies opened and we received a torrential downpour. Cooling but treacherous on some of the descents. The final hour I started to feel cramps and cursed the thinness of my tri suit padding, but it passed and I was relieved to get off the saddle. Bike time 5:43.26

Passed off the bike to a waiting helper in T2 (what a novelty!) and into the changing room. After a long first transition I had planned a short T2 but alas my legs started spasming in a painful cramp each time I reached down to put my socks on. Out of T2 and onto the run and within the first kilometer my stomach didn’t feel right. I slowed right down but couldn’t work out whether the problem would work its’ way up or work its way down. Fortunately (perhaps) it was the former, and at km 4 the lucozade I had been gratefully chugging through the bike course was violently discharged into the nearest bush. Kilometer 4 to 15 felt very slow as I trepidly sipped a few mouthfuls of water at each aid station, and tried to steel my mind for the hours that lay ahead. Slowly it felt like the worst had passed, and the rest of the run consisted of a gentle pace with walking through the aid stations. The run course is 2.5 laps alongside the airport, through the resort and alongside the beach, and then all the way back out again. The support was fantastic, the aid stations were well-manned and had plenty of ice and sponges, and there is a general feeling of comraderie as everyone digs deep and burrows into that pain cave somewhere in their minds. Slowly the sun started to set, the lights on the cars strategically positioned every 100m along the course were turned on, and I knew I would just miss a daylight finish. Despite knowing that I would now make it, I had nothing left and couldn’t increase the pace into the finish. Run time 4:19.33 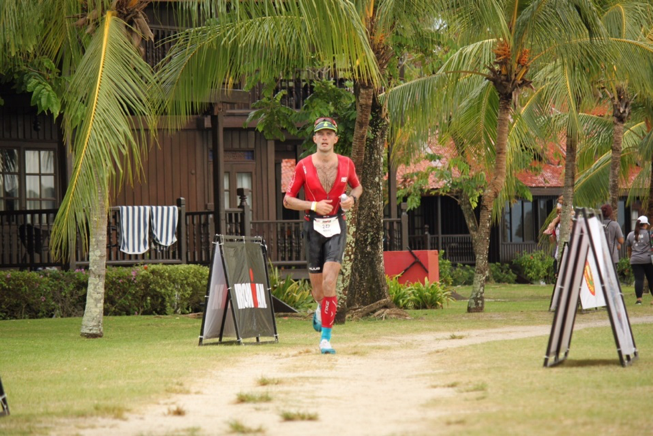 “You are Ironman”, the iconic call as I came through the line, was lost in the relief of finishing the run and finishing the race. Towel, a heavy medal, ice bath, and gentle massage before my body started shaking despite the 30 degree heat and I realised I needed to get out of these clothes and into a hot shower. Overall a fantastic experience and a memorable day, Ironman Langkawi is in my opinion a must-do race.