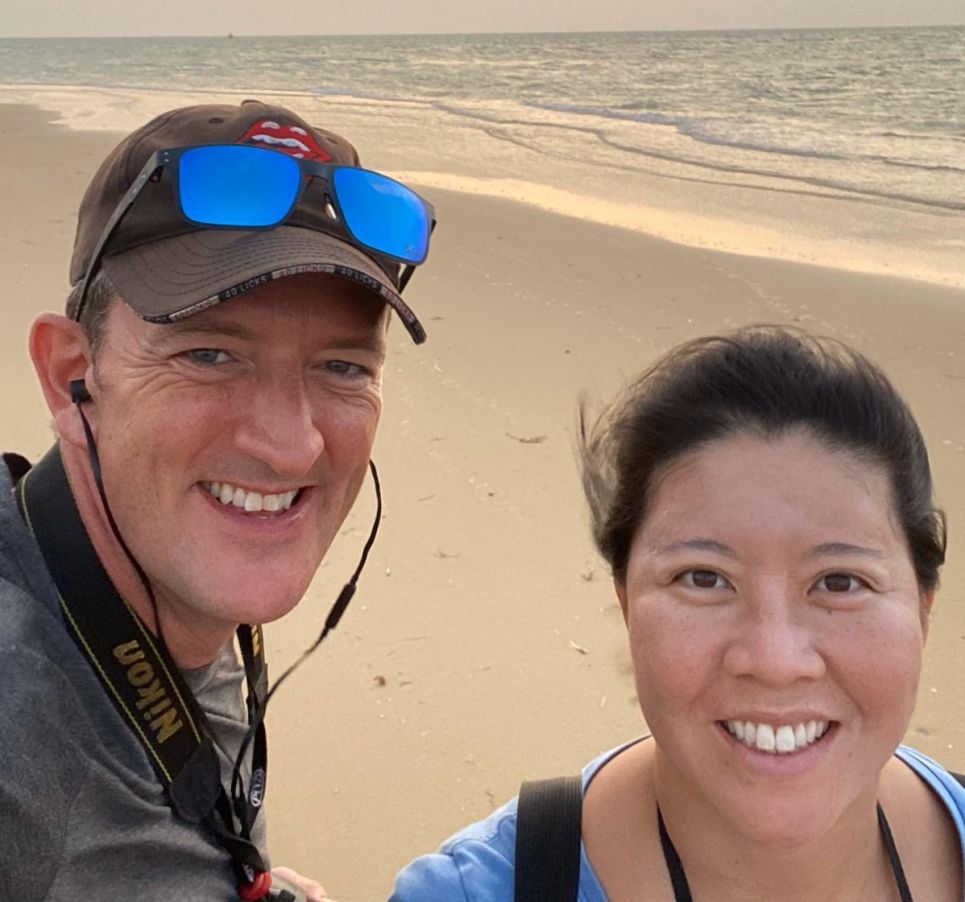 Swimming 29km across the Palk Strait

Setting off Talaimannar Beach, Sri Lanka on 26th January 2020 and swimming the 29km Palk Strait to India in a record time of 10 hours and 18 minutes, Adam Moss alongside Edie Hu set the second-fastest time in the official record to cross the Strait. 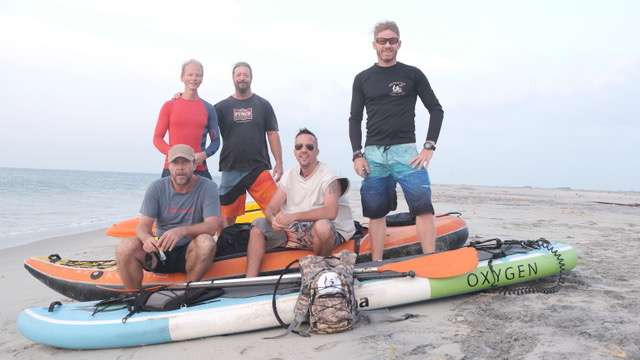 Adam is an open water swimmer based in Hong Kong and has trained for 6 months prior to his journey to Sri Lanka to swim across the Palk Strait. The Palk Strait is a strait formed between the Tamil Nadu state of India and the Jaffna district of Sri Lanka and is 53-82 kilometers wide and a crossing is often attempted by Indians and Sri Lankans over the years. As the first non-Indians to swim the Strait, Adam’s journey was aided by the efforts of Sail Lanka, Vayu Kite camp and the Sri Lankan Navy. We catch up with Adam about his journey.

1. What inspired you to swim the Palk Strait?
- It was actually through a Top Gear episode! It took me about 5 minutes to decide to do it
after I saw Top Gear float two tuk-tuks across half-way to India; whereas I initially thought
they went the whole way. I thought “that looks swimmable” and I was right! Incidentally, I
was also told in April that I needed a total knee replacement by surgeons in Hong Kong and
the UK but one of the best knee specialists based in Sydney actually assured me I wouldn’t
need one for another 8 years. So, by the end of 2019, I was pretty committed to the swim
and wanted to follow through with it.

2. Do you swim professionally?
- Not really. Never of major note but I was school champion, American Club in China (Taipei)
swim champion and have competed in some triathlons including 2 legs - swim and bike - of
Ironman Western Australia in 2011. 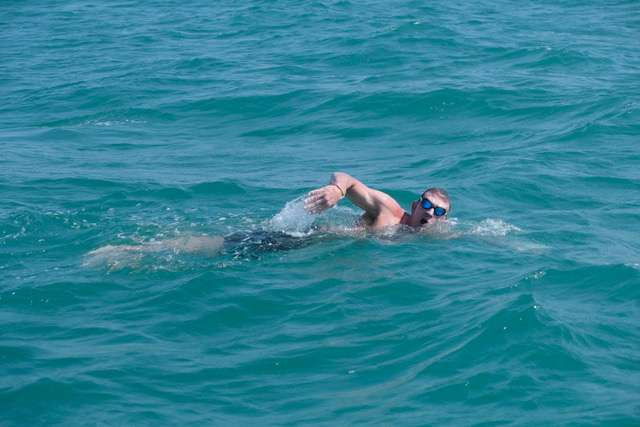 3. How did you train and prepare for it?
-A lot of swimming! I swam with good friends in Hong Kong every Sunday in Repulse Bay and
over Christmas, we were swimming with a lone dolphin in Deepwater Bay. I also swam once a week before work in Hong Kong in a 50m pool with SwimLab where my coach Fenella Ng was instrumental in getting me ready. I also did lots of yoga, it really, really helps mentally and physically so it is not just an activity for cross-country swimmers!

I trained alongside fellow Tritons Edie Hu, who also swam across the Strait with me and Simon Holiday who
was supposed to join us but couldn’t due to a factor of events. Both Edie and Simon have swum
around Hong Kong which is about 45km in just 12 hours and 30 minutes. The furthest I had
swum prior to the crossing was 15km in a race called the Cold Half in Hong Kong in January
which I managed to do it in just over 4 hours. 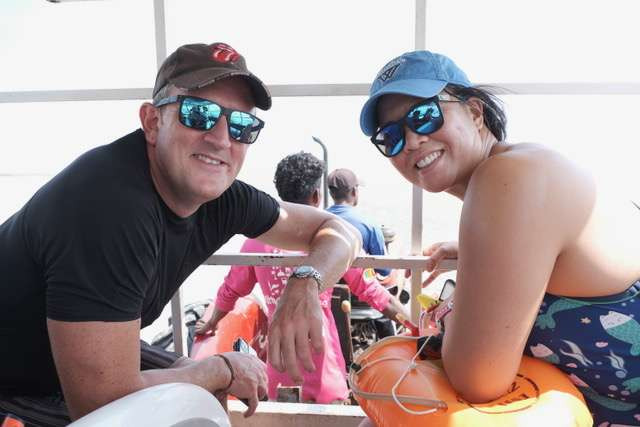 4. Where there a lot of logistics involved in sorting out the permissions for the swim?
- Well, I wrote to the Minister of Defence in Colombo after the Presidential Election and
received initial approval on 9th January 2020 and then after that, I was trying every day to get
approval from the Indian side, which came (as I had predicted) just the day before the actual
swim! So, making sure we had the necessary permission and approvals proved to be a bit
stressful but I was fortunate to have the full support of the Sri Lankan Navy. In between the
approvals, we went ahead with planning the expedition, appointing a producer from Hong
Kong who ran all the logistics and also brought a cameraman from Hong Kong to film the
effort. Co-ordination was significant but great fun!

5. You were the first non-Indians to swim the Strait and you finished with a record time of 10
hours 18 minutes, just second to the official record! How did it feel to achieve this?
- We were the two of the first non-Indians according to Long Swims Database - 12th equal
and second fastest time. Edie actually would have been quicker if she didn’t wait for me. I
had been wrongly informed that we were 2km out at about 7.5 hours in so I gunned it
thinking a record was possible only to be told 15 mins later that there was in fact another
6km to go! But I didn’t come to swim across the Strait aiming to break the record. In about 2
years, I hope to redo the full swim again but I’m only looking for a personal best, not to
break any records!

6. Swimming the Palk Strait sounds quite complicated and we are sure the journey wasn’t
without hardships. What were some of the challenges you’ll had in attempting the journey?

-I think not knowing if we were going all the way to India until we were 4km from the
international maritime boundary line was the most stressful element and the whole operation
had its fair share of elements of huge stress. But it was also mostly huge amounts of fun with a
team of approximately 30 people including crew provided by our generous sponsor Sail Lanka, a
number of excellent volunteers who are great friends of mine from the Galle area, the
production team from Hong Kong and of course, the Sri Lankan Navy!

7. The swim is physically quite exhausting but was it also equally mentally draining? How did you keep going?

- I never really thought of giving up but the last few hours were definitely the hardest
mentally due to me pushing myself too soon. Having to do another 6km, with the sea
picking up as it always does after midday, and with a 30m hovercraft of the Indian Coastal
Guard circling us was pretty hard and daunting. Fortunately one of our support ribs insisted
on remaining with us up to 500m offshore in 50cm of water (as we had agreed we would do
with Indian and Sri Lankan authorities so we did not need to process immigration on both
sides) and, having had some pictures taken with the Indian Coast Guard, the rib picked up
Gary and I. It was another hour until we got back to the 54’ Sapphire as it had to stay 5km
offshore due to sandbanks. By the time I got back to the Sapphire I was broken, but alive,
and had done it!

8. How important was it to have a support team in carrying out the journey?
- Absolutely essential! Edie kept on joking that I had pulled all the resources together whilst
“when the Indians do it, they just have a fishing boat!” but she (and Simon) had played a key
role in outlining our requirements requesting the team, including a paddler each. Stevie
Gray became the first to stand-up paddleboard across the straight and Gary Richardson the
first to inflatable kayak across! We absolutely would not have been able to do the crossing
(with my brave mum getting on and off the Sapphire at 2am and 9pm respectively!) without
our support team and certainly not at that time of year. We took a risk with timing, even
though the historical data suggested it would be ideal, as Simon wanted to do the crossing
in good time before his child is born and I myself wanted to do the swim on my youngest
daughter’s 11th birthday but ended up doing it the day after.

9. What’s next?
- I love swimming and yoga, so I will be continuing with both. My good friend in the Sri Lankan
Navy has suggested I swim from Kirinda to Great Basses lighthouse so I intend to see if that’s
possible this year and will be asking Navy for permission this week. Sadly due to Covid-19
many things are difficult, even swimming in open water, so failing this year I will definitely
do so next year. Next year I also intend to swim just half-way across the Strait along Adams
Bridge on the 28th March. I will invite 4 other swimmers to race but expect them to let me
win as it will be my 50th birthday! (laughs). We are also hoping to produce a documentary
of the Palk Strait swim and retro-actively raise money for Youth Diabetes Action (my oldest
daughter was diagnosed in 2015) in Hongkong, a donkey sanctuary in Mannar and for a
charity in India as well. 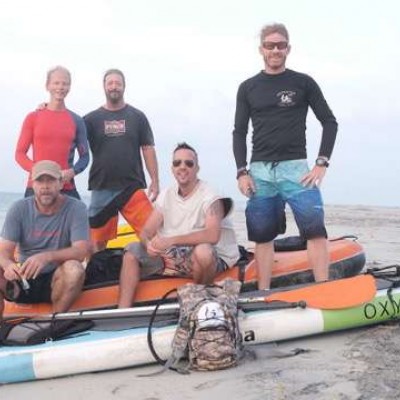 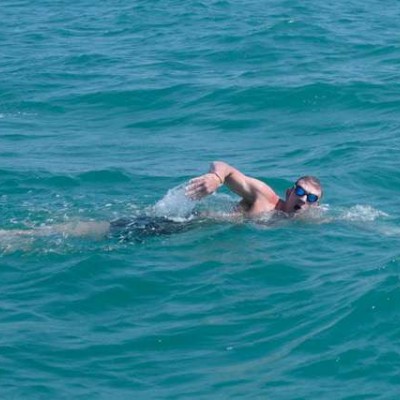